Despite its size, Israel is lucky to have three seas: The Mediterranean, the Dead and the Red (the Sea of Galilee, to the north, is really a lake although it also has beaches).Here, we offer you here a selection of the ten best beaches in the country.

Beit Yannai Beach
The beach has the name of the former king of Judea Alexander Yannai. The state of the Alexander River, north of Netanya, was unfortunate until a restoration project completed in 1994 transformed the area into a beautiful nature reserve. The river flows into the sea on the beach. Pristine and peaceful, this beach is considered by many Israelis as the most beautiful in the country and the ideal spot for kite-surfing. The Israel Parks and Nature Authority placed signs near the beach with information about the surrounding flora and fauna. You can camp and there are picnic tables, restaurants and showers. It is accessible for wheelchair visitors. Be sure to visit the nearby eucalyptus forest and ruins.

Coral Reef Beach (Red Sea) The best place to snorkel in Eilat is this popular beach among those who practice diving on a reef and ideal for the whole family. It is located on the coral reef further north of the planet and allows visitors to admire a multi-colored aquatic garden and the animals that inhabit it. Rent a snorkel gear, goggles, fins and a life jacket and dive into the warm waters full of tropical wonders. Umbrellas and sunbeds, hot showers and a kiosk complete the services offered.

Mineral Beach (Dead Sea) Do you want mud? You will have all you want. Although in many beaches of the Dead Sea you can buy bags of its famous mineral-rich mud -to apply it to the skin-, on this beach there is a gigantic mud pit that you can even get into. Do you prefer a natural jacuzzi? There is also one, consisting of hot sulfur wells. When you get tired of floating in the waters of the Dead Sea, go to the freshwater pool. On this clean and accessible beach, you can rent a towel or a box to store your things, give yourself a health treatment or lie on a sun bed. In addition, the place has an amphitheater, a cafeteria and showers to remove mud and sand. Located at the northern end of the Dead Sea, it is quickly reached from Jerusalem. Its soil is less stony than that of the southernmost beaches. 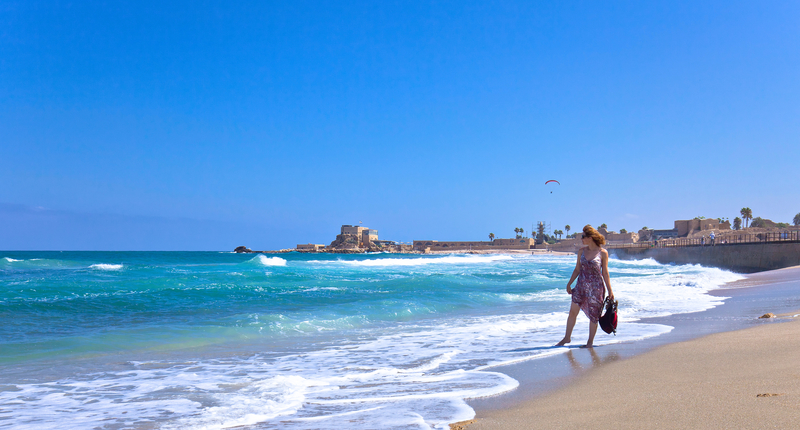 Banana Beach The entire western strip of Tel Aviv is full of beaches. On Friday afternoons, Banana Beach, at the southern end and next to Yafo, has become a kind of sanctuary for bohemians where groups of young people gather at sunset to play drums, sing and dance on the cliffs. It is a great place to end a walking tour of Tel Aviv. The rest of the week is peaceful. There you will find people sunning themselves or playing “matkot” (popular paddle game among Israelis). At night, the cafe on this beach offers free televised movies and sports.

Dado Zamir Beach
This beach located in the center of the country has beautiful gardens along the waterfront, restaurants, cafes, free parking, benches and seating areas, as well as a dance floor (with weekly shows and Israeli folk dance on Saturdays), An amphitheater for summer events, sports courts and a children's pool. The waterfront extends from the southern end to the northern part of Carmel Beach, located next to it. There is parking, showers, toilets and ramps for people with different abilities.

Sironit Beach
Netanya has one of the largest coastlines in Israel. The city on the way north of the country has eight beaches. What makes Sironit special, at the southern end of the city, is its panoramic lift, which goes from the Rishonim Promenade, a bridge-shaped structure, to the beach in just 20 seconds. The trip costs a shekel. Two breakwaters facing the beach create quiet bays to swim safely almost all year. Sironit has a restaurant, a stage and a gym, among other services.

Metzitzim Beach Located north of Tel Aviv overlooking the SdeDov airport, this place used to be known as Sheraton Beach by the hotel that was previously located there. But his name was later changed to Metzitzim, a Hebrew word that means "voyeurs." This change is due to the famous movie of the same name. Metzizim attracts young people and families alike. Its waters are calm and temperate due to the presence of an artificial lagoon. There is a restaurant and a children's playground. To the south there is also a section for religious bathers, who do not mix with people of the opposite sex. The days for women are Sundays, Tuesdays and Thursdays. For men, Monday, Wednesday and Friday.

Dor Habonim Beach Located south of Haifa at one of the exits of Route 4, this beach is part of a relatively remote coastal nature reserve and frequented by residents of the area's kibbutzim and families. His name in Hebrew means "Generation of builders." The natural stone piers, which are perfect for children to climb and feel in them, and the natural lagoons prevent the waves from being very strong. There are trails that cross the bays from which you can see caves and wild flowers. There are no bathrooms and it is not accessible by public transport. But this is precisely what makes it one of the favorites of those looking for remote places. In addition to the spaces for swimming, DorHabonim is the headquarters of the Paradive company, which specializes in parachuting for amateurs and with which you can fly accompanied by an instructor.

Aqueduct Beach
This beach is unique because of its location: it is a few meters from an ancient Roman ruins. While enjoying the clean white sand, you can marvel at the aqueduct built by King Herod in the first century of this era and expanded in the next 300 years to bring water to Caesarea from springs Shummi, on Mount Carmel, almost ten kilometers away. There are no restaurants (just a kiosk), nor loud music or crowds of people. Lifeguards only serve some parts of the place, which is also known as Playa de los Arcos.